How to Turn Your Team Super-Productive with ThinkOwl 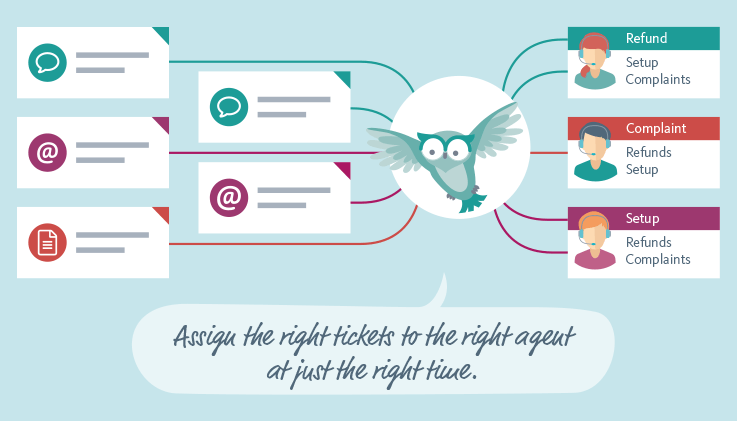 Are you struggling with mundane tasks at your helpdesk? What if you get a one-click solution for all those dull routine jobs?

Read on and learn how an AI-based service-desk software can lead your business to true autonomy.

Michelle's business journey is an outstanding example of how you can lead your business to true autonomy.

Michelle is the proud owner of a mid-sized information (IT) enterprise. She had gained great success in very little time on her business journey.

Everything was going well until she realized there are a lot of service silos in the organization. This made her realize that sustaining the business was as important as building it. She was afraid these service silos could restrain her business's sustainability in the market. And she started her search for adequate and reliable solutions to resolve both her and her team's problems.

Michelle not only wanted her business to work smoothly but was now aiming to raise all bars. She wanted to make it big.

Once, while pondering over better plans for the company, Michelle caught a glimpse of her team. Everyone was preoccupied with service requests. She noticed her team member's desks and anticipated problems such as...

Michelle knew her people were smart. They just couldn’t get the right information at the right time to make the smartest decisions.

She thought of adding more people offshore for a short run. At the same time, she was sure this would have its own problems and costs.

While exploring ways to bring this chaos to end, one of her employees brought ThinkOwl to her attention: the competitors were using some cloud-based service software leading to a better system. This got her curious.

Further research showed her that ThinkOwl is not just a cloud-based ticketing service, it is also an efficient tool that provides versatile in-the-cloud AI and automation triggers to complete routine tasks. She learned that this would help her define and enforce formal workflows to be followed whenever a new ticket is opened. Also she would be able to automate many of the repetitive tasks thereby taking them off her team's plate.

Round Robin — the load balancer

Michelle could see her agents overloaded with pending tickets all the time. Her company was receiving support requests from multiple channels (emails, phones, chat messages, etc.) and she was at a loss for ideas to balance the regular inflow of ticket load.

They were supporting through multiple channels, too. Thankfully, ThinkOwl's auto-assignment algorithm made things super smooth for everybody. Tickets got automatically assigned and intelligently routed tickets to the right agents.

The best part was, ThinkOwl could intelligently balance the ticket load among the agents while auto-assigning. In this way, it acted as a load balancer. Michelle knew this would ease the tasks of her teammates to great extents.

ThinkOwl uses the Round-robin algorithm to balance ticket load based on active agents. This algorithm ensures your agents are not overloaded with tickets all the time by equally auto-assigning tickets to available agents.

Now Michelle no longer worries about allotting work or measuring the potential of her people. The load balancer took care of it all.

AI-based automation in ThinkOwl enabled Michelle to route tickets to a particular agent or a group of agents. ThinkOwl gave her the ability to formulate conditions and use condition selectors while using automation she'd build. She perceived that she could formulate any automation criteria based on any customer or ticket information like subject title, first message, priority, keywords, channel or customer name.

In situations where agents might be working on service requests that take much more time to resolve than expected ThinkOwl gave Michelle a gamut of productivity tools and assignment rules that ensured her agents were not overwhelmed with a lot of unresolved tickets.

Assignment rules were nothing but cause-and-effect statements, which means if "X" happens then do "Y".

For instance, a rule could be:

Although such assignment rules define the workflow of tickets, most systems wouldn't be intelligent enough to route to an alternative agent under special circumstances like: agent not ready to take on the ticket, agent on another call, agent not available without notice and so on. For such special events, AI-based help desks such as ThinkOwl are a boon as they automatically assign tickets to the available agent.

Here's how ThinkOwl led Michelle from monotony to autonomy with its productivity tools.

Michelle wanted a proper system to manage service requests. Previously, the prevailing approach had been that an employee opens a ticket. The ticket then gets assigned to someone on the team, who handles it. However, there was no logical reason for how this was done. ThinkOwl's Dispatcher Rules gained control of this situation and resolved all her concerns. Dispatcher Rules define what happens to every new ticket. This gave Michelle a scope to formulate conditions specific to her business needs. As soon as she creates a new ticket, Dispatcher Rules execute on it, in the order in which she saved them. When a new ticket meets the set of condition formulations, subsequent actions to those conditions apply to the ticket. Administrators could also form conditions that are mandatory or optional while setting up Dispatcher Rules.

Michelle was happy to see a drastic systematic change in how her staff worked at their desks.

So by now, Michelle knew how to manage new tickets. How about automating what to do with ticket updates? Pretty much similar to Dispatcher rules, it helped trigger actions (as the name suggests) on any updates to any existing ticket. Michelle's agents no longer had to remember what they had updated or needed to update. Required actions were triggered automatically once the agents updated tickets.

Getting rid of mundane tasks

Previously, Michelle's team had been struggling with repetitive dull tasks daily. She had always wondered if something could give them a one-click solution for all of those mundane routine tasks. ThinkOwl just made it super easy to perform all such jobs for her. Now replying to a customer request was just one click away for agents. This saved a lot of time for agents and doubled their productivity. Team productivity was increased roughly by 40% after using ThinkOwl. Agents could focus on more critical jobs and Michelle knew that a more productive team was the stepping stone to creating great value for her customers.

ThinkOwl made all of Michelle's problems vanish in no time. There was a standardized system for managing tickets, so no one wasted time on regular monotonous tasks, everyone was delivering customer service on all channels from a single inbox view, and the right tickets were being passed on to agents with the right skills. She was amazed to see such great results. ThinkOwl gave wings to her enterprise.

(Disclaimer: Michelle is a fictional character, but ThinkOwl is for real. Try it!)